Arbitrage refers to a somewhat peculiar and rare situation in the financial world. It is succinctly described as follows. Suppose you start with an initial situation – let’s say you have some money in an ultra-safe bank that earns interest at a certain basic rate

. Assume, also, that there is a infinitely liquid market in the world, where you can choose to invest the money in any way you choose. If you can end up with

financial outcomes that are quite different, then you have an arbitrage between the two strategies. If so, the way to profit from the situation is to “short” one strategy (the one that makes less) and go “long” the other strategy (the one that makes more). An example of such a method would be to buy a cheaper class of shares and sell “short” an equivalent amount of an expensive class of shares for the same Company that has definitely committed to merge the two classes in a year.

An argument using arbitrage is hard to challenge except when basic assumptions about the market or initial conditions are violated. Hence, in the above example, suppose there was uncertainty about whether the merger of the two classes of shares in a year, the “arbitrage” wouldn’t really be one.

One of the best known arbitrage arguments was invented by Fischer Black, Myron Scholes and Robert Merton to deduce a price for Call and Put Options. Their argument is explained as follows. Suppose you have one interest rate for risk-free investments (the rate

two paragraphs above). Additionally, consider if you, Dear Reader, own a Call Option, with strike price

, on a stock price.  This is an instrument where at the end of (say) one year, you look at the market price of the stock and compute

, while the stock price was initially

. At the end of the year, suppose the stock price became

, so you, Dear Reader and Fortunate-Call-Option-Owner, would make

. On the other hand, if the stock price unfortunately sank to

is negative. In this case, you, unfortunate Reader, would make nothing. A Call Option, therefore, is a way to speculate on the ascent of a stock price above the strike price.

Black-Scholes-Merton wanted to find a formula for the price that you should logically expect to pay for the option. The simplest assumption for the uncertainty in the stock price is to state that

follows a random walk. A random walk is the walk of a drunkard that walks on a one-dimensional street and can take each successive step to the front or the back with equal probability. Why

? That’s because a random walker could end up walking backwards for a long time. If her walk was akin to a stock price, clearly the stock price couldn’t go below 0 – a more natural choice is

. A random walker is characterized by her step size. The larger the step size, the further she would be expected to be found relative to her starting point after

steps. The step size is called the “volatility” of the stock price.

In addition to an assumption about volatility, B-S-M needed to figure out the “drift” of the stock price. The “drift”, in our example, is akin to a drunkard starting on a slope. In that case, there is an unconscious tendency to drift down-slope. One can model drift by assuming that there isn’t the same probability to move to the right, as to the left.

The problem is, while it is possible to deduce, from uncertainty measures in the market, the “volatility” of the stock, there is no natural reason to prefer one “drift” over the other. Roughly speaking, if you ask people in the market whether IBM will achieve a higher stock price after one year, half will say “Yes”, the other half will say “No”. In addition, the ones that say “Yes” will not agree on exactly by how much it will be up. The same for the “No”-sayers! What to do?

B-S-M came up with a phenomenal argument. It goes as follows. We know, intuitively, that a Call Option (for a stock in one year) should be worth more today if the stock price were higher today (for the same Strike Price) by, say

. Can we find a portfolio that would decline by exactly the same amount if the stock price was up by

. Yes, we can. We could simply “short” that amount of shares in the market. A “short” position is like a position in a negative number of shares. Such a position loses money if the market were to go up. And I could do the same thing every day till the Option expires. I will need to know, every day, from the Option Formula that I have yet to find, a “first-derivative” – how much the Option Value would change for a

increase in the stock price. But once I do this, I have a portfolio (Option plus this “short” position) that is

Now, B-S-M had the ingredients for an arbitrage argument. They said, if such a portfolio definitely could make more than the rate offered by a risk-less bank account, there would be an arbitrage. If the portfolio definitely made more, borrow (from this risk-free bank) the money to buy the option, run the strategy, wait to maturity, return the loan and clear a risk-free profit. If it definitely made less, sell this option, invest the money received in the bank, run the hedging strategy with the opposite sign, wait to maturity, pay off  the Option by withdrawing your bank funds, then pocket your risk-free difference.

This meant that they could assume that the portfolio described by the Option and the Hedge, run in that way, were forced to appreciate at the “risk-free” rate. This was hence a natural choice of the “drift” parameter to use. The price of the Option would actually not depend on it.

If you are a hard-headed options trader, though, the arguments just start here. After all, the running of the above strategy needs markets that are infinitely liquid with infinitesimal “friction” – ability to sell infinite amounts of stock at the same price as at which to buy them. All of these are violated to varying degrees in the real stock market, which is what makes the B-S-M formula of doubtful accuracy. In addition, there are other possible processes (not a simple random-walk) that the quantity

An arbitrage argument is akin to an argument by contradiction.

Arguments of the above sort, abound in Physics. Here’s a cute one, due to Hermann Bondi. He was able to use it to deduce that clocks should run slower in a gravitational field. Here goes (this paraphrases a description by the incomparable T. Padmanabhan from his book on General Relativity).

Bondi considered the following sort of apparatus (I have really constructed my own example, but the concept is his). 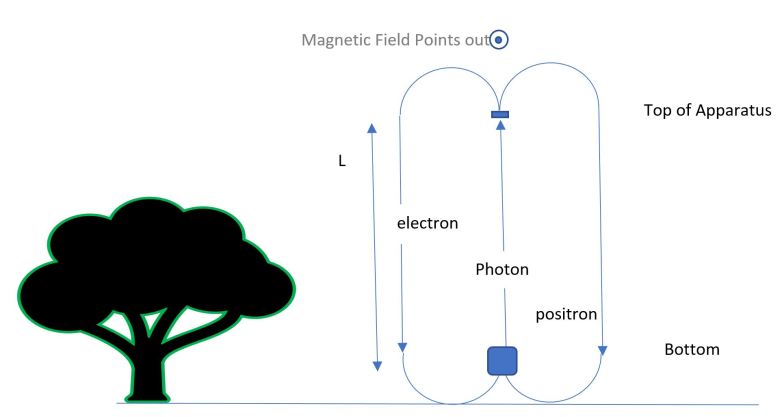 One photon rushes from the bottom of the apparatus to the top. Let’s assume it has a frequency

at the bottom of the apparatus and a frequency

at the top. In our current unenlightened state of mind, we think these will be the same frequency. Once the photon reaches the top, it strikes a target and undergoes pair production (photon swerves close to a nucleus and spontaneously produces an electron-positron pair – the nucleus recoils, not in horror, but in order to conserve energy and momentum). Let’s assume the photon is rather close to the mass of the electron-positron pair, so the pair are rather slow moving afterwards.

), they experience a strong magnetic field (in the picture, it points out of the paper). The law that describes the interaction between a charge and a magnetic field is called the Lorentz Force Law. It causes the (positively charged) positron to curve to the right, the (negatively charged) electron to curve to the left. The two then separately propagate down the apparatus (acquiring a momentum

) where they are forced to recombine, into a photon, of exactly the right frequency, which continues the cycle. In particular, writing the energy of the photons in each case.

, the electrons have slightly higher speed at the bottom than at the top.

We know from the usual descriptions of potential energy and kinetic energy (from high school, hopefully), that the electron and positron pick up energy

(each) on their path down to the bottom of the apparatus. Now, if the photon doesn’t experience a corresponding loss of energy as it travels from the bottom to the top of the apparatus, we have an arbitrage. We could use this apparatus to generate free energy (read “risk-less profit”) forever. This can’t be – this is nature, not a man-made market! So the change of energy of the photon will be

indeed, the frequency of the photon is higher at the bottom of the apparatus than at the top. As photons “climb” out of the depths of the gravitational field, they get red-shifted – their wavelength lengthens/frequency reduces. This formula implies

so , for a weak gravitational field,

so comparing the time intervals between successive ticks of a clock at the surface of the earth, versus at a point infinitely far away, where the gravitational potential is zero,

The conclusion is that the time between successive ticks of the clock is measured to be much smaller on the surface of the earth vs. far away. Note that

is negative, and the gravitational potential is usually assumed to be zero at infinity. This is the phenomenon of time dilation due to gravity. As an example, the GPS systems are run off clocks on satellites orbiting the earth at a distance of $20,700$ km. The clocks on the earth run slower than clocks on the satellites. In addition, as a smaller effect, the satellites are travelling at a high speed, so special relativity causes their clocks to run a little slower compared to those on the earth. The two effects act in opposite directions. This is the subject of a future post, but the effect, which has been precisely checked, is about 38

seconds per day. If we didn’t correct for relativity, our planes would land at incorrect airports etc and we would experience total chaos in transportation.

View all posts by Simply Curious