The Special Theory of Relativity, which is the name for the set of ideas that Einstein proposed in 1905 in a paper titled “On the Electrodynamics of moving bodies”, starts with the premise that the Laws of Physics are the same for all observers that are traveling at uniform speeds relative to each other. One of the Laws of Physics includes a special velocity – Maxwell’s equations for electromagnetism include a special speed

, which is the same for all observers. This leads to some spectacular consequences. One of them is called the “Relativity of Simultaneity”. Let’s discuss this with the help of the picture below.

Babu is sitting in a railway carriage, manufactured by the famous C-Kansen company, that travels at speeds close to that of light. Babu’s sitting exactly in the middle of the carriage and for reasons best known to himself (I guess the pantry car was closed and he was bored), decides to shoot a laser beam simultaneously at either end of the carriage from his position. There are detectors/mirrors that detect the light at the two ends of the carriage. As far as he is concerned, light travels at

and he will challenge anyone who says otherwise to a gunfight – note that he is wearing a cowboy hat and probably practices open carry.

Since the detectors at the end of the carriage are equidistant from him, he is going to be sure to find the laser beams hit the detectors simultaneously, from his point of view.

Now, consider the situation from the point of view of Alisha, standing outside the train, near the tracks, but safely away from Babu and his openly carried munitions. She sees that the train is speeding away to the left, so clearly since

, she would say that the light hit the

detector first before the

Wait – it is worse. If you had a third observer, Emmy, who is skiing to the

at an even higher speed than the C-Kansen (some of these skiers are crazy), she thinks the C-Kansen train is going off to the right (think about it), not able to keep up with her. As far as

is concerned, the laser beam hit the

detector before the other beam hit the

They are ALL correct, in their own reference frames. Events that appear simultaneous in one reference frame can appear to occur the one before the other in a different frame, or indeed the one after the other, in another frame. This is called the Relativity of Simultaneity. Basically, this means that you cannot attribute one of these events to have

the other, since their order can be changed. Events that are separated in this fashion are called “space-like separated”.

Now, on to the topic of this post. In the physics of quantum field theory, particles interact with each other by exchanging other particles, called gauge bosons. This interaction is depicted, in very simplified fashion so we can calculate things like the effective force between the particles, in a sequence of diagrams called Feynman diagrams. Here’s a diagram that depicts the simplest possible interaction between two electrons

Time goes from the bottom to the top, the electrons approach each other, exchange a photon, then scoot off in different directions.

This is the simplest diagram, though and to get the exact numerical results for such scattering, you have to add higher orders of this diagram, as shown below 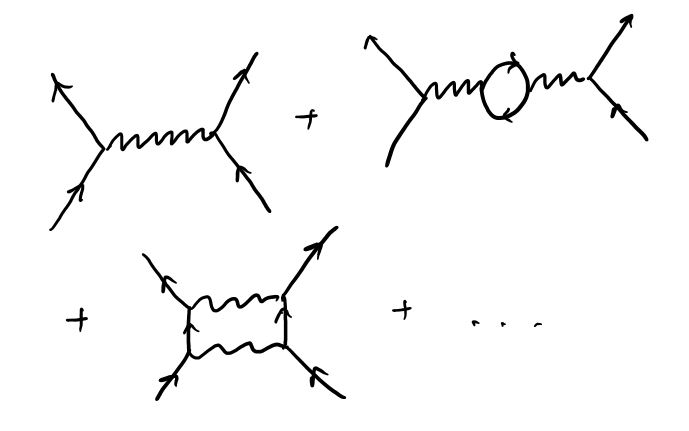 When you study such processes, you have to perform mathematical integrals – all you know is that you sent in some particles from far away into your experimental set-up, something happened and some particles emerged from inside. Since you don’t know where and when the interaction occurred (where a particle was emitted or picked up, as at the vertexes in the above diagrams), you have to sum over all possible places and times that the interaction

Now comes the strange bit. Look at what might happen when you sum over all possible paths for a collision between an electron and a photon.

In the above diagram, the exchange was simultaneous.

In the next one, the electron emitted a photon, then went on to absorb a photon.

and then comes the strange bit –

When we sum over all possible event times and locations, this is really what the integrals in quantum field theory instruct us to do!

Really, should we allow ourselves to count processes where  two events occur simultaneously, which means we would then have to allow for them to happen in reverse order, as in the third diagram? What’s going on? This has to be wrong! And what’s an electron going backwards in time anyway? Have we ever seen such a thing?

Could we simply ban such processes? So, we would only sum over positions and times where the intermediate particles had enough time to go from one place to another,

There’s a problem with this. Notice the individual vertexes where an electron comes in, emits (or absorbs) a photon, then moves on. If this were a “real” process, it wouldn’t be allowed. It violates the principle of energy-momentum conservation. A simple way to understand this is to ask, could a stationary electron suddenly emit a photon and shoot off in a direction opposite to the photon, It looks deceptively possible! The photon would have, say, energy

. This means that the electron would also have momentum

, in the opposite direction (for conservation) but then its energy would have to be

from the relativistic formula. This is higher than the energy

of the initial electron :

We are stuck. We have to assume that energy-momentum conservation is violated in the intermediate state – in all possible ways. But then, all hell breaks loose – in relativity, the speed of a particle

is related to its momentum

If the electron were uncharged, we would probably be hard-pressed to notice. But the electron is charged. This means if we had the following sequence of events,

– electron emits a photon and travels forward in time

– electron absorbs a photon and goes on.

This sequence doesn’t appear to change the net charge in the universe.

But consider the following sequence of events

– the electron emits a photon and travels backwards in time

Now, at some intermediate time, the universe seems to have developed two extra negative charges.

This can’t happen – we’d notice! Extra charges tend to cause trouble, as you’d realize if you ever received an electric shock.

The only way to solve this is to postulate that an electron moving backward in time has a positive charge. Then the net charge added for all time slices is always -1.

ergo, we have antiparticles. We need to introduce the concept to marry relativity with quantum field theory.

There is a way out of this morass if we insist that all interactions occur at the same point in space and that we never have to deal with “virtual” particles that violate momentum-energy conservation at intermediate times. This doesn’t work because of something that Ken Wilson discovered in the late ’70s, called the renormalization group – the results of our insistence would be we would disagree with experiment – the effects would be too weak.

For quantum-field-theory students, this is basically saying that the expansion of the electron’s field operator into its components can’t simply be

but has to be

The next post in this sequence will discuss another interesting principle that governs particle interactions – C-P-T.

Quantum field theory is an over-arching theory of fundamental interactions. One bedrock of the theory is something called C-P-T invariance.  This means that if you take any physical situation involving any bunch of particles, then do the following

then you will get a process which could (and should) happen in your own world. As far as we know this is always right, in general and it has been proven under a variety of assumptions. A violation of the C-P-T theorem in the universe would create quite a stir. I’ll discuss that in a future post.

Addendum: After this article was published, I got a message from someone I respect a huge amount that there is an interesting issue here. When we take a non-relativistic limit of the relativistic field theory, where do the anti-particles vanish off to? This is a question that is I am going to try and write about in a bit!

View all posts by Simply Curious